Skip to content
Uncategorized
November 19, 2021
nigemord@gmail.com
Leave a Comment on Arrests made after drivers stop to scoop up cash scattered across California freeway
Spread the love 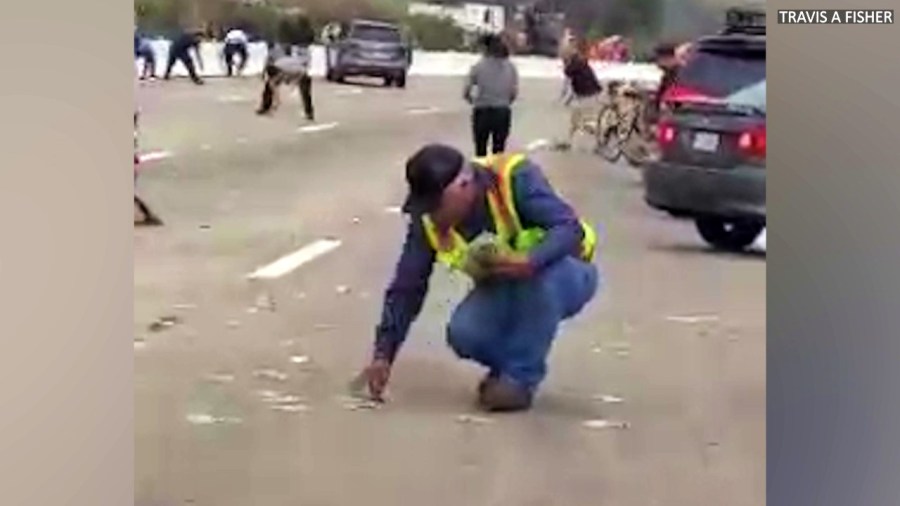 SAN DIEGO, Calif. (KSWB) — Two people were arrested and others could face consequences after drivers stopped on a San Diego freeway Friday to try to scoop up cash that was blowing across lanes, California Highway Patrol said.

The doors of an armored truck came open on the Interstate 5 around 9 a.m. Friday, sending cash flying. Traffic was halted as numerous people got out of their cars. The armored truck driver started picking up the bills but eventually began recording people taking the cash, according to the CHP.

Two adults, a man and a woman, were arrested on suspicion of taking money, the CHP official said, adding that the pair’s car was blocking traffic after they got locked out of their vehicle. CHP said officers were aware of videos on social media that could serve as evidence in their search for those who grabbed the cash.

“If you found money on the freeway, it is not your money,” said CHP Sgt. Curtis Martin. “It belongs to the FDIC (Federal Deposit Insurance Corporation) and this armored truck and the bank. It needs to be returned.”

Martin asked the public to return an additional found money but said he couldn’t guarantee punishment would be avoided.

Travis Fisher, a driver who got caught in the chaos and shared a video of people scooping up bills with KSWB said he thought it was initially an accident.

“There was a bunch of cars in front of me that all stopped, came to a complete stop,” he said.

Fisher was surrounded by big rigs and couldn’t see ahead, but he noticed some of the truckers were getting out of their vehicles and “running between the lanes of traffic.”

“I see all these things floating around and I realize it’s money,” Fisher continued. “It was pretty crazy. Just everywhere, there was a sea of bills, everywhere.”

Fisher estimated there were thousands of dollars on the road.

By about 10 a.m., California Highway Patrol officers could be seen trying to keep drivers off the freeway and picking up bills, which they placed in plastic bags. An armored vehicle from Sectran Security Inc. was pulled over on the side of the highway, and authorities were working to learn what caused the doors to open before the cash spilled out of the truck.

CHP said they were working with the Federal Bureau of Investigation on the next steps in the investigation.