Skip to content
Uncategorized
November 2, 2021
nigemord@gmail.com
Leave a Comment on 'Help me': Video shows officers jump into river to save woman in sinking car
Spread the love 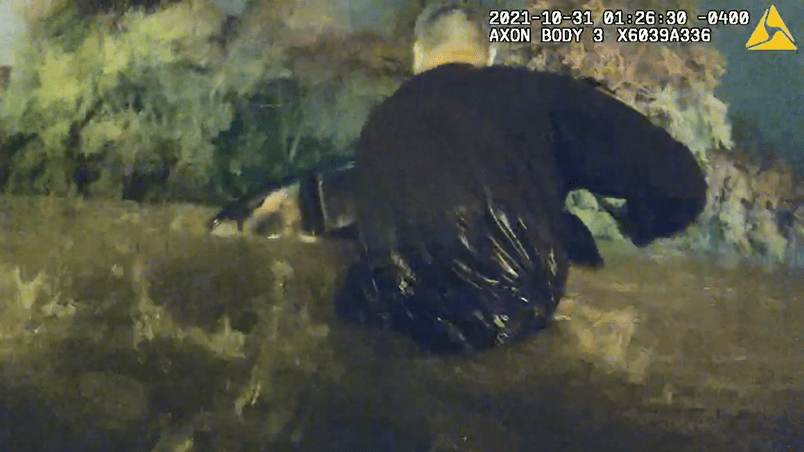 MUNCIE, Ind. (WXIN) — A young woman is alive after three Indiana police officers rescued her from a sinking car in the White River.

On Sunday morning, just before 1:30 a.m., Delaware County Dispatch received a call from a woman who said she was trapped inside of her car in the river.

The 18-year-old frantically said to a dispatcher, “Hello, I – I’m in the White River and my car — the doors won’t open. I – I don’t know what happened.”

For nearly six minutes, that dispatcher remained on the line with the woman, trying to keep her calm and learn more information as officers responded to the scene, worked to locate her car and help get her out.

The driver, whose family said is a first-year Ball State University student, told dispatch she wasn’t sure what happened and believed she briefly closed her eyes and the next thing she knew she was in the river.

Officer Casey Bell, who’s been with the Muncie Police Department just under three years, arrived and said he saw the hatchback with the front-end almost completely underwater and the back almost submerged as well.

“I went completely to the bottom of the hill just to see what was going on. Once I got down there, I took all my gear off, jumped in the river and saw that there was a female trapped in the driver’s seat,” said Bell. “I tried to open the door and it wouldn’t open from the outside.”

Sgt. James Lenox, an 18-year veteran of the department, arrived and said he spotted Bell already in the water and ran down to help.

“As I’m coming down the hill, he’s asking for a baton,” said Lenox. “I was going to start taking all my gear off until I was like, we ain’t got time.”

Lenox gave Bell the baton and went around to the passenger side of the vehicle to try and find another way in.

“As soon as I came around the corner, the current hit me, and I grabbed ahold of the door handle and it swept my legs backward, so I was kind of like Superman-ing it,” Lenox described.

Sergeant Greg Skaggs, who has been with the department for 10 years, was the next to arrive.

“I pulled up and see that they’re already getting in the water and I hear them trying to break the window,” said Skaggs. “I immediately stripped my gear off as I’m going towards the river and jumped right in with them.”

When the officers reached the woman, the water was already up to her neck. On a 911 call, the woman frantically told the dispatcher, “It’s so cold and it’s coming up to my neck. It’s not stopping.”

“Please help me,” she begged.

“I started hitting the window until I could get a hole big enough just to stick my hand through,” said Bell.

He was able to reach through the hole but was still having difficulty opening the door, so he cleared the glass out of the way until he could pull the woman through the window and out of the car.

The officers helped the woman to shore and said they were initially worried there may be another person in the car.

“After that point, Sgt. Lenox had mentioned he thought he saw somebody else’s head inside the vehicle,” said Skaggs.

Skaggs volunteered to check the car and went head-first into the hatch, which had popped open from the current, to make sure there was nobody else trapped inside.

“I told Officer Bell, I was like, ‘Hey grab my feet, I’m gonna go in this way and feel around and see if I can find anybody,'” said Skaggs.

Because the current was so strong, Bell held on to his legs and feet as he went in and helped pull him out when he confirmed there was nobody inside.

“It’s impossible to see because the water was so dark,” said Bell. “It was six feet at least, probably in the water, and currents were strong.”

The three officers said they were relieved to find out there was nobody else inside the car.

“That was a huge relief. Huge,” said Lenox.

“It was a wide range of emotions,” said Skaggs, who added, “More just the happiness after walking away knowing that there was nobody else in the car and we saved this young woman’s life.”

MPD Deputy Chief Melissa Pease said, “When I watched the bodycam videos, I was just very impressed. I mean, it was just great teamwork by all of them.”

“I don’t think any of the officers involved took a moment to think about what possibly could’ve happened to them. It was they had a job to do when they went in there and completed it,” she added.

Albeit cold and wet, the officers were uninjured, and the woman was transported to the hospital with injuries believed to be non-life-threatening. She has since been released from the hospital, her family confirmed.

Police do not believe drugs or alcohol were involved in the crash.

“She’s calling for help and hoping someone can come and rescue her, and I’m so thankful that our officers were able to do that,” said Pease.

“Every call that we go on is an unknown, you know, you may have information that tells you what it is, but it’s never going to turn out exactly how the call is put out,” said Pease.

Pease said all officers train in the academy for water rescue, but the city has a dive team and fire department that typically responds to these types of calls. Skaggs, Lenox and Bell knew there was no time to wait in this situation.

“We were able to save a life, and that’s what our jobs are,” said Skaggs. “We’re here to serve the community, and at the end of the day, that’s what we did.”

“It’s not my first water rescue, but it definitely is the most emotional one,” said Lenox, who participated in around eight water rescues over the years.

“We’re here to do a job. We did our job and we don’t think of ourselves as heroes. We get in here to make a difference,” Lenox added.

“I’m glad that we had the outcome that we did because it could’ve went south very quickly,” said Bell.