Skip to content
Uncategorized
October 25, 2021
nigemord@gmail.com
Leave a Comment on Trucks blow over on California bridge amid strong storm
Spread the love 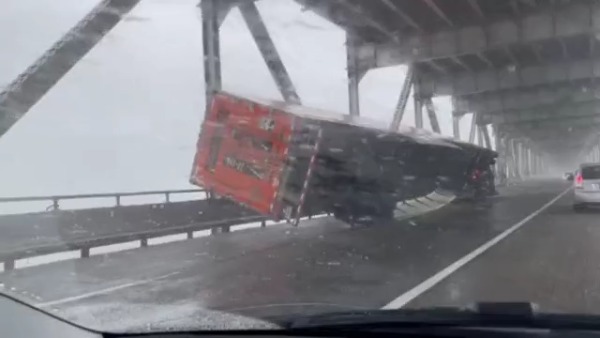 The California Highway Patrol reported issued a severe traffic alert due to the overturned tractor-trailer and a traffic collision.

At one point, the front end of a third car blew off.

Motorists were advised to expect delays and use alternate routes if possible.

Elsewhere in Northern California, highways were flooded, trees were toppled and mudflows were triggered in the burn scars of recent wildfires.

The National Weather Service’s Sacramento office warned of “potentially historic rain” as an atmospheric disturbance drenched the region. By sunrise on Sunday, Mount Tamalpais just north of San Francisco had recorded over 6 inches (15 centimeters) of rainfall during the previous 12 hours, the weather service said on Twitter.

“Some of our higher elevation locations could see 6, 7, 8 inches of rain before we’re all said and done,” weather service meteorologist Sean Miller said.

The California Highway Patrol closed a stretch of State Route 70 in Butte and Plumas counties because of multiple landslides within the massive Caldor Fire burn scar.

“We have already had several collisions this morning for vehicles hydroplaning, numerous trees falling, and several roadways that are experiencing flooding,” tweeted the highway patrol’s office in Oroville. “If you can stay home and off the roads today, please do. If you are out on the roads, please use extreme caution.”